How much does a rhinoceros weigh?

One of the largest mammals on earth

Contrary to what one might think, the dress of the white rhinoceros is not white, but a pretty gray-brown. But why is it called that? The white rhino takes its name from the shape of its wide, square mouth. When translating his Afrikaans name, an error was made. Indeed, in Afrikaans, "large" translates to "wide". At the time understood in "white" which means to say "white", the name of the animal originally "wide-mouthed rhinoceros" was translated as "white rhinoceros". The white rhino is the second largest land mammal after the elephant. In adulthood, the white rhinoceros weighs between 1.6 to 2.5 tons. In this animal, the male is usually heavier and larger than the female. At birth, a baby rhinoceros already weighs between 50 and 80 kg. When the little one comes into the world, it does not have small horns at the end of its nose. Moreover, the adult white rhinoceros has the particularity of having two horns just like the Sumatran rhinoceros and the black rhinoceros. This is not the case of its Indian and Java cousins ​​who only have one. Each individual of this species can carry up to a few kilograms of horns. Depending on the age and species, the weight varies. In the adult white rhinoceros the horns can weigh up to 6 kg. 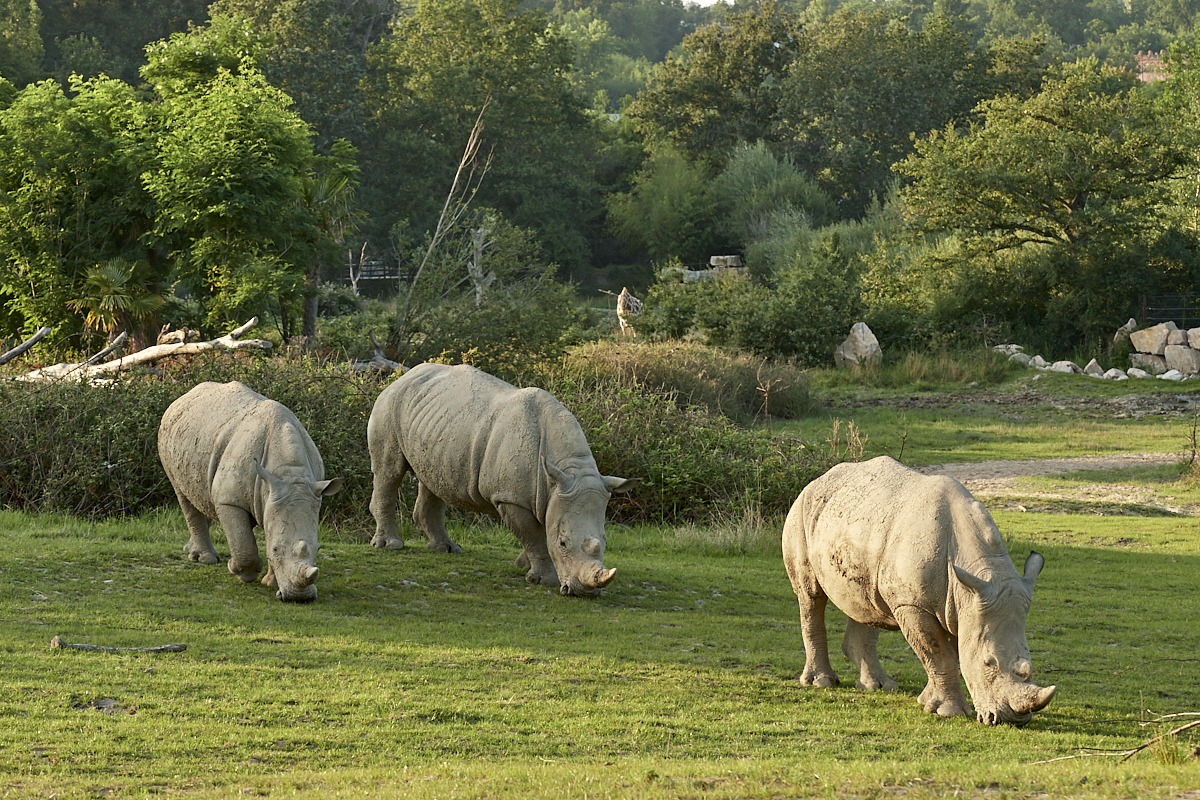 With such an imposing corpulence, the rhinoceros eats up to its weight. Also, the adulated white rhinoceros eats at least 50 kg of vegetation every day. He doesn't eat meat at all! Its diet is strictly plant-based. The white rhinoceros is a member of the herbivore family. It can travel very long distances in order to browse en masse on green shoots, stems, leaves, buds, and even wild berries and fruits. Its diet is not selective, the white rhinoceros in adulthood is content to eat what it finds in its environment, even if it has a preference for very tender grasses.

Unlike its peers, the adult white rhino does not eat in meal cycles. Due to their weight and different mouths, other rhinos are forced to feed at night and until early morning. When temperatures are higher, they tire more quickly. Rhinos therefore prefer to rest to maintain a relatively low body temperature.

The rhinoceron unlike the adult white rhinoceros will be breastfed by its mother, throughout the year following its birth. Even if it is able to start grazing the grass of the plain from two months. His 100% plant-based diet will begin when he turns one.

In its natural habitat, in the savannah as in the jungle, white rhinos live close to other herbivorous animals to protect themselves from their predator. However, the imposing weight of the adult white rhino makes it virtually invulnerable to other animals. It has few predators. Only young people are unfortunately regularly attacked. They are easy prey for lionesses, who hunt in groups, and hyenas.