What does the rhinoceros eat?

Where can you see rhinos in the wild?

The rhinoceros is an animal present in several parts of the world. Thus, this species is present on the African continent, in Indonesia in Sumatra and Java, in Asia in Borneo, India, Vietnam, as well as in Nepal. This rather solitary animal mainly lives in the savannah. According to their location, the rhinoceros is not the same. There are 5 subspecies of rhinos in the world:

The white rhinoceros is found mainly in Africa. On this continent, the animal lives in a relatively open environment such as plains, wooded savannahs and scrubby areas. These places suit him well since he finds the basis of his diet there.

The white rhinoceros is part of the large herbivore family, as are the giraffes and zebras with which it lives. Yes, it is not a carnivorous mammal! Rhinos absolutely do not eat meat, or even insects. In adulthood, the rhinoceros weighs between 1.6 to 2.5 tons depending on the species to which it belongs. With such an imposing body mass, the rhinoceros eats up to its weight. Thus, every day, the rhinoceros eats at least 50 kg of vegetation. It can travel very long distances in order to browse en masse on green shoots, stems, leaves, buds, and even wild berries and fruits. Its diet is not selective, the rhinoceros is content to eat what it finds in its environment, even if it has a preference for very tender grasses. 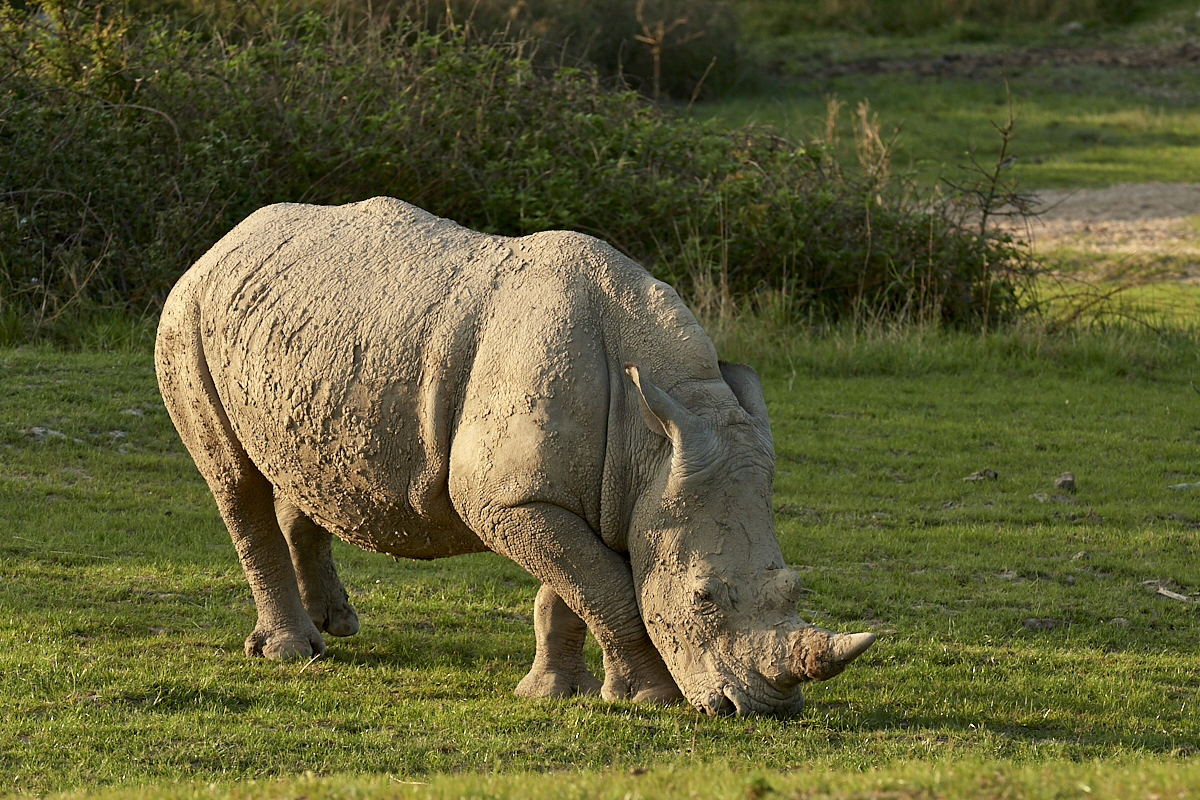 Does the rhinoceros eat more during the day or at night?

This species is both a nocturnal and diurnal predator. Generally, the rhinoceros eats at night and until early in the morning. If he does not feed during the day, it is because of his weight. When temperatures are higher, the rhino tires more quickly. He prefers to rest for maintaining a relatively low body temperature.

Unlike its congeners, the white rhinoceros does not eat in meal cycles. Head down, the animal spends half of its day roaming the prairies of the Savanne in search of low vegetation. Its wide jaw is relatively square, even flat. It allows him to graze quickly, and more easily, the low grasses he finds and which are more nutritious than the tall grasses. The diet of the animal is close to that of others of its species. The rhinoceros eats: bush grass, plants, leaves, stems, seeds, bark of wood, nuts, pollen, flowers, and even sap.

In terms of hydration, the rhinoceros ensures that it drinks regularly throughout the day. In its natural habitat, this is unfortunately not always possible. In the savannah as in the jungle, water is scarcer. Similarly, when the dry season begins, it is increasingly difficult to find water points. Faced with this difficulty, the animal is lucky enough to be able to last several days without even drinking a single drop. His vegetarian diet is for many. Indeed, the plants that the rhinoceros eats contain nearly 50% water.